Business as Usual Scotbark are able to carry out safe home deliveries during this difficult time.

We are working within the Government guidelines to ensure that risk is minimised while still supplying mulch, bark, soil and garden furniture.

Contact us today to discuss your needs. Scotbark are here to help. 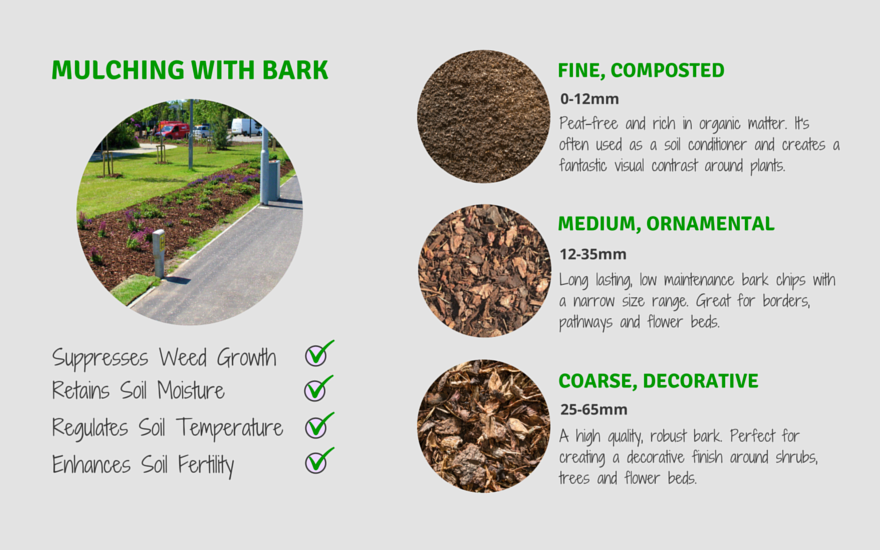 A mulch is simply a layer of material applied across the surface of an area of soil. It’s often used to condition the soil and discourage weed growth.

Organic mulches include bark chippings, shredded bark, wood chippings, wood shavings and compost. These materials retain soil moisture, regulate soil temperature, and suppress weeds. As they naturally decompose, they also release a range of nutrients that enrich the soil and enhance its fertility.

Mineral and synthetic mulches include gravel, crushed rock, and plastic fabric materials. While these materials will condition soil and discourage weed growth, they are not known to enhance soil fertility.

What does bark do when used as a mulch?

When is the best time of year to apply bark as a mulch?

Mid to late spring and autumn are usually the best times for mulch application, when soil is both moist and warm. In winter and early spring soil is often too cold, while in summer it can be too dry.

Bark’s weed suppression capacity arises purely as a result of the physical barrier it creates – depriving weeds of the sunlight they need to grow. Weed seeds land on the mulch surface and are washed down to the soil by rainwater. As they try to germinate on the soil surface, the shoot is deflected underneath the bark where it runs out of vigour and dies. The coarser the bark, the greater its weed suppression capacity.

It’s important to note that our bark does not kill plant life whatsoever - any established plants with strong shoots or bulbs, such as crocuses and snowdrops, will grow through as normal.

Is bark good for the ground?

Yes! Bark protects the soil and any plant roots from summer drought and the full force of thunderstorms. It also provides a layer of insulation, which means that the soil and any plant roots are less likely to succumb to the effects of fluctuating temperatures throughout the year - which is what can cause plants to "heave" out of the ground. When the bark eventually decomposes, it releases a range of nutrients and organic matter that enrich the soil below, and enhance its fertility.

In order to provide a steady supply of nutrients directly into the soil, you should continue do so in the normal way e.g. by using liquid feeds when watering.

How long does bark last; when will it need replenished?

Bark breaks down slowly and will not need replenished often - some of our mulches laid 5 years ago are still as effective today. However, routine top ups may be necessary should soil show through (often as a result of animal interference or cultivation techniques). We’d recommend that you replenish bark every 2-3 years in order to maintain its full benefits. The coarser the bark, the longer it should last.

To what depth should I lay the mulch?

We recommend laying bark 2-4 inches (50-100mm) deep. For finer barks such a composted bark, 2 inches is sufficient. For coarser barks such as bark nuggets, 3-4 inches may be more beneficial. Be careful not to lay too thickly as this can deprive the soil and plant roots of oxygen; or too thinly, as this will increase the soil’s exposure to sunlight and may hinder weed control.

How much bark will I need?

Have a look at our Bark Coverage Chart.

Can I plant bedding plants amongst bark?

Absolutely. All you need to do is clear bark from the area to be planted – be it a small area for a single plant, or an entire bed for mass planting – and replace after planting. Bedding plants thrive in soil that’s protected from severe weather fluctuations, so they should flourish with no further maintenance required (other than initial watering).

Can the soil still breathe below the bark?

There is a significant amount of experimental research showing the inhibition of a number of plant root diseases when using composted bark - these include Rhizoctonia, Pythium, Phytophthora, Tomato Root Knot and Forsythia Parasitic Nematodes.

The exact processes involved are not yet proven, but an anti-biotic effect is suspected to arise from micro-organisms within the bark. Mulching with bark creates a much healthier root environment, which is also thought to be a contributing factor.

What is the pH of bark, and does it make the ground acidic?

The pH of our bark is on the acid side of neutral, pH5-6. In comparison, peat is usually in the range of pH3-3.5. Because bark lies on the soil surface, it allows for the passage of rainwater and air into the soil, and therefore has no harmful effect on the soil's pH.

Does bark take up nutrients from the soil?

When used as a surface mulch, bark has no effect whatsoever on the soil’s nutrients - it does not directly supply nutrients, nor does it deplete the soil of nutrients.

When used as a soil conditioner, or in tree planting, however, bark will reduce the amount of nutrients available to plants. This is not considered a major concern as when the bark decomposes, the nutrients are re-released into the soil as the bark acts as a slow release fertiliser.

To maximise the bark's benefits, soil should be fertilised prior to, or at the time of bark incorporation.

Should I be concerned about Terpenes in the bark?

Bark protects trees from attack throughout their life and accordingly has a diverse range of organic compounds in its make-up. 'Terpenes' are one particular group of compounds in fresh bark that are known to have an adverse effect on plant growth. Therefore, if fresh bark is incorporated into soil adjacent to plant roots, the plant may be affected by Terpenes.

However, during the composting process, these compounds become gaseous and diffuse into the atmosphere. In short, Terpenes are not present in composted bark.

There have been no cases of Terpenes identified using our ornamental mulch, which is 83% Scots Pine. As stated by Margaret Smith, "The terpenes content in Pine Bark is so low that it is innocuous." Terpenes can therefore be disregarded.